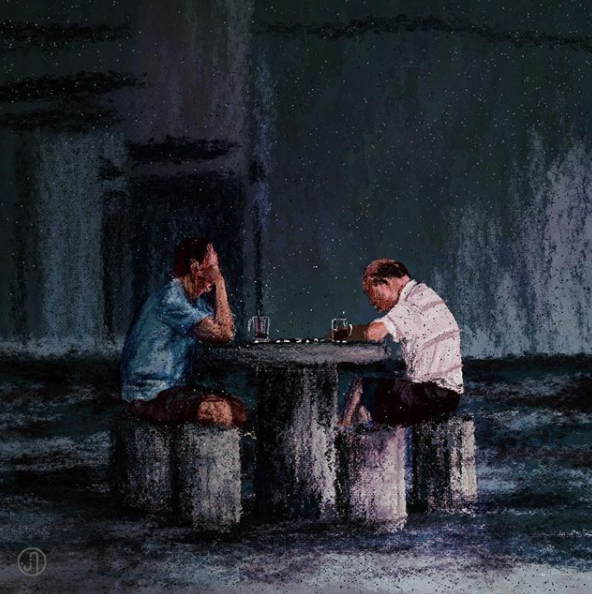 Workers hosed down the facade of my block this morning to make way for a fresh coat of paint. Like most Singaporeans, I didn’t pay any mind to the surface of the building before. It always seemed clean enough, an apathetic 3.5/5 stars on a public satisfaction survey. But today, the water seeped through the cracks in the paint and bore holes through previously unnoticed bubbles. The building shed chunks of decaying paint and the debris laid in a powdery heap on the ground, revealing the chalky primer from the last paint job.

And then I saw it. A spot of red peeking through the primer. This was the colour of the building in my childhood.

I felt immediate heartache, and for a moment I thought I could feel the weight of my schoolbag on my shoulders, the loose elastic of Bata socks drooping around my ankles.

You see, when Singapore changes, it changes so rapidly and efficiently that it doesn’t leave traces in its wake. McDonald’s outlets seem to pop up overnight, fully furnished. New stations are added on the MRT network map, first through imperceptible stickers, and then printed as if it had always been there. When you google Singapore, neon pictures of the Marina Bay skyline load into view. To witness material evidence of the time that has passed, to be struck by the ageing of my home, that’s something that isn’t programmed to be in the Singaporean consciousness. This makes it easy for us to skip over our collective grief.

I am 24 years old this year and my parents, like many other Singaporeans, are approaching their 60s. Their names are a combination of a “Christian name” they chose in their 30s and a haphazard romanisation of characters in a Southern Chinese dialect. My father was the son of a Burmese businessman, but was kicked out of the house at 18. He soon began his career as a construction worker. My mother was the ninth child of a Hong Kong immigrant. She tied tiny paper parachutes to plastic soldiers for extra pocket money in her youth. Today, they are comfortable middle-class Singaporeans and VIP customers, the 老顾客 (lao gu ke), of the tze char stall near my block.

I watch them shoot back-and-forth banter with the Malaysian waitress at the hawker centre, an acrobatic display of mastery in five or so “improper” regional languages. For the generation that the government tried to control with the Speak Mandarin campaign, their natural speech is a seamless amalgam of Cantonese, English, Mandarin, Hokkien and Malay, a never-ending showdown of puns. Tom yum goong is poor thing soup. “Anything” is green vegetables. My parents are like poets in the neighbourhood hawker centre, and it hurt me to watch them stammer when they spoke to my university professors. The big-big angmoh university name swallowed them up.

The ethos of the Singaporean baby boomer generation is best summarised in the national aspiration to the five Cs—Cash, Car, Credit Card, Country Club, and Condominium. If my generation saw the advent of the digital age, my parents’ generation saw the steroid-pumped adrenaline-filled ballooning of the Singaporean economy. Relentless globalisation introduced a never before seen array of consumer imports and our parents’ income rose to accommodate their thirst for products. We were catapulted into opulence, and it shows in the lifestyles of middle-class Singaporeans today. We go for sushi dinners in air-conditioned shopping malls and parade the occasional LV bag at hotel ballroom weddings, but at home we have drawers full of dabao containers that our mothers save, just in case. Old habits die hard.

Now that my house is supplied with more dabao containers than I can ever use in a lifetime, I find myself wondering about the Singapore that will disappear with our parents. I was too busy doing my Ten Year Series maths exercises to notice my childhood slipping away. This is not just my personal mourning for my bygone adolescence. This is also the mourning for a life I saw through my parents’ eyes, the languishing of a certain closeness, the recognition of the growth spurt that we went through together as Singaporeans. We speak a different Singlish from our parents. There will be a day when “jolly well” and “dilly-dally” will fade from our vocabulary. Many of our parents barely finished school, but we went through an intense education with marker’s reports and CCA points. Has there ever been a greater difference between the lives of two generations?

One day I won’t hear anymore Cantonese in my house. How do we say goodbye?

Stuff I talk about